The woman Taib Mahmud waited for 75 years (in pictures) 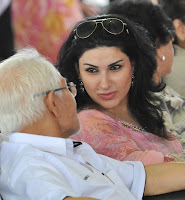 This is her. Ragad Waleed, the 31-year old former air stewardess from Lebanon that Sarawak's scandal-plagued chief minister Taib Mahmud waited 75 years for!
Finally, Taib threw her the most lavish wedding reception that Sarawak has ever seen. It is his second marriage after Polish-born wife Laila Taib of 50 years died of cancer in April last year.
Even Prime Minister Najib Razak and his wife Rosmah Mansor came.
However, conspicuously absent was son Sulaiman Taib! Now, where can he be - the Kota Samarahan MP whom the Sarawak Report has accused of being down with a 'lifestyle' illness!
Born in May 1936, Taib is 44 years older than Ragad - more than twice in fact.
Not surprisingly, rumors have abounded that his family is concerned about her growing influence over his fabulous wealth and huge business empire that spans several continents.
His political allies are even more worried the buxom Ragad may dilute and blunt his ruthlessness over their common foes.
Has the time come for strongman Taib to finally lose his grip on Sarawak - one of the most richly-endowed with natural resources in Malaysia?
Only time can tell if indeed theirs is true love ... and if they will live happily ever after ...  (scroll below for the related stories)

The Most Corrupted & Bastards Chief Minister

SHY TAIB TO ADMIT TO BRIDE ON JAN 15TH

Posted by Kerajaan Rakyat at 6:29 PM

Email ThisBlogThis!Share to TwitterShare to FacebookShare to Pinterest
Labels: Others, Photos, Sarawak, Social